Cinnamon Rolls are one of the best breakfast treats, but waiting for them to rise and bake can be agonizing. This Giant Fluffy Cinnamon Roll bakes up in less than 30 minutes and requires very little preparation.

This giant cinnamon roll requires no waiting for a second rise or waiting until the next day - all you have to do is open up a can of cinnamon rolls, roll them into a giant cinnamon bun, sprinkle the top with cinnamon sugar - then bake and glaze. It's the perfect breakfast for Easter Sunday or Christmas morning because it comes together quickly - and requires minimal prep.

How to Make a Giant Fluffy Cinnamon Roll

Making a Giant Fluffy Cinnamon Roll could not be any easier. First, you will need to preheat the oven to 350°F. Next, open a can of cinnamon roll dough and take out the cinnamon rolls. Set the icing off to the side and let it come to room temperature.

Separate each roll & carefully unroll them. Using your hands, roll each into long sections.

Starting in the middle of a pan, spiral each long section in circles.

Continue until you have one large cinnamon roll.

Bake the giant cinnamon roll for 20 - 25 minutes until golden brown. How delicious does that look?

Spread the icing, then slice and enjoy. You can use a pizza cutter for easier cutting.

How do you keep cinnamon rolls soft and moist?

How do you make canned cinnamon rolls better?

One of the easiest ways to make canned cinnamon roll dough taste better is to top the cinnamon rolls with extra cinnamon and sugar and some melted butter. You can also pour some heavy cream into the bottom of the pan that you bake the cinnamon rolls in - the rolls absorb the cream and get fluffy and soft.

How do you jazz up store-bought cinnamon rolls?

Can you make cinnamon rolls in an air fryer?

Can you make cinnamon rolls in a slow cooker?

You can, but it is best to bake them as more of a casserole. Here's a recipe for Crockpot Cinnamon Roll Casserole.

What Can You Serve with Cinnamon Rolls?

Here are some great side dishes that go with cinnamon rolls -

Or just serve your giant cinnamon roll with regular old eggs and bacon!

Did you make this recipe? If so, please leave a comment and rating below. I love hearing from you. 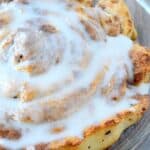 Pin
Print Pin
No ratings yet

Thanks for visiting Tried & True Recipes! Here you will find delicious family-friendly recipes that are quick & easy to make. This way, you can enjoy your time with your family as well as the delicious food you prepare for them!
Find Out More ->